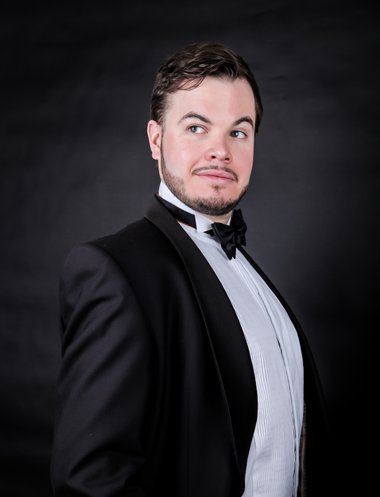 (If you require a biography for a programme, please request one from me)

It’s been such a joy to return to the world of public performance since the many lockdowns and isolations of the past two years. I hit the ground running at the start of 2022 on a UK tour with the wonderful English Touring Opera playing the roles of Alcindoro (La Bohème) and Russell the Tree (How to Find Your Name). Over the summer I was happy to visit both Buxton International Festival and Waterperry Opera Festival to reprive the role of Sir Thomas Bertram and I am currently enjoying performing in central London at Charing Cross Theatre as Gasparo in Donizetti's Rita. The year has been full of new theatres, exciting opportunities and, above all, good friends. I am looking forward to working with Gothic Opera again in the Autumn on their double bill of Viardot's Le dernier sorcier and Bertin's Le loup-garou!

Highlights of 2021 included playing Peter (Father) in Waterperry Opera Festival’s Hansel and Gretel, a production which fully incorporated British Sign Language and in which I accompanied myself on the piano accordion; playing the villainous Prince Vyazemsky in Grange Park Opera’s production of Ivan the Terrible; and singing Le Baron de Maldaw in Gothic Opera’s Offie Award-winning production of La Nonne Sanglante (Gounod).

I have also recently sung for the Royal Shakespeare Company in London and New York; Opera North; the BBC Singers; Leeds Lieder Festival and a Last Night of the Proms Concert with Grimethorpe Colliery Band at Harrogate Royal Hall for Marie Curie.

During the lockdowns of 2020/21 I kept myself busy, as so many artists had to, in adapting to online and virtual working situations. I produced video and recorded performances, delivered online rehearsals and workshops, and developed many new skills, all of which will continue to be useful into the future. Creating and editing video content to as high a quality as possible with minimal budget and equipment has become somewhat of an obsession and I already find myself in demand to create content for opera companies and choirs.

Born in Dorset, I attended the Thomas Hardye School where I began my vocal training and sang with the Chapel Choir. In 2008 I completed a BA (hons) Degree in Music Studies at Leeds College of Music where I studied singing with Christian Immler and Jane Anthony. I graduated with the Douglas Robinson Memorial Prize for Opera and continued to study with Paul Nilon at the start of my professional career.

I am a Licentiate of the Royal Academy of Music where I graduated in 2017 after studying with Alex Ashworth and Audrey Hyland. During my time at the Academy I appeared as Kalenik in the RAOpera production of May Night (Rimsky-Korsakov), Polyphemus in Acis and Galatea (Handel, Semi-staged) Liberto (cover) in L’Incoronazione di Poppea (Monteverdi), Rambaldo in La Rondine (Puccini, scenes), Minskman in Flight (Dove, scenes), Demetrius in Midsummer Night’s Dream (Britten, scenes) and Jonathan in Siren Song (Dove, scenes). A soloist and chorister for the RAM/Kohn Foundation Bach Cantata Series, I also gave recitals at The Wigmore Hall and Marylebone Parish Church. I performed in a public masterclass with Dennis O’Neill; delivered education projects at Hackney Empire, RAM Museum and Glyndebourne; and was very proud to be a member of the Academy’s prestigious Song Circle and grateful to be supported by the Josephine Baker Trust.

Since graduating from RAM, I am continuing to forge a career in operatic performance and have sung as a soloist for Buxton Festival Opera, Retrospect Opera, Merry Opera Company, XOGA, Felici Opera, Northern Opera Group, Proper Opera, Opera on Location and Young Opera Venture. For a full list of credits please download my most recent performance CV above.

For the past decade I have appeared regularly as an oratorio soloist, recitalist and professional chorister up and down the country performing as soloist for works such as: Messiah, Samson and Israel in Egypt (Handel); St Matthew, John and Luke Passions (Bach); Elijah (Mendelssohn); Stabat Mater (Dvořák); Eternal Light: A Requiem (Goodall); and Songs of Milarepa (Glass). I’ve had the pleasure of being a Lay Clerk for the cathedrals of Bradford and Manchester and have performed with the BBC Singers.

I am proud to be the Learning and Participation Manager for Leeds Lieder where I coordinate and deliver workshops in schools and the wider community to introduce new audiences to Classical Song. As a workshop leader, I've worked with Music in Offices, Bradford Cathedral, Wigmore Hall, Opera North and Hull University and have delivered workshops for the NHS Training Academy, the Leadership Foundation for HE, Endemol, Enotria&Coe, Amnesty International, Bank of England and Surbiton High School to name a few.

I also very much enjoy working with choirs and have directed groups for Leeds Beckett University, Ravensbourne College and Bradford Academy. I currently direct three choirs based in law firms for Music in Offices and a community choir, Fleet Singers, based in Gospel Oak - www.fleetsingers.org.uk.

For a break from singing, I enjoy playing the piano accordion and bass guitar in ceilidh bands and at folk festivals throughout the UK and finding inspiration and refreshment through long walks in the country.